A Walk In The Park. 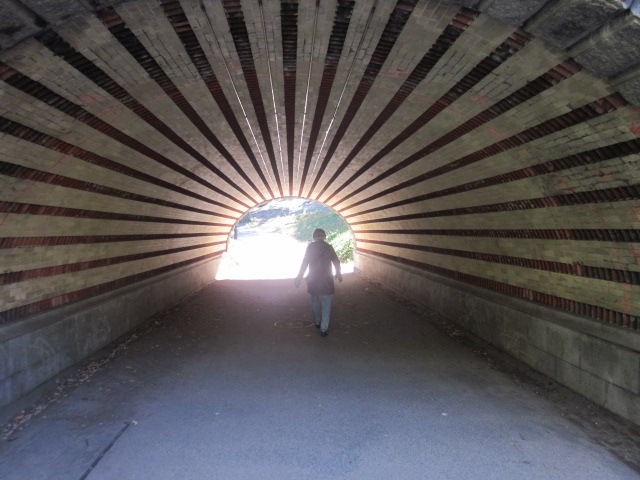 This photograph was taken in Central Park, New York City. It does not look like a typical walk in the park, it is actually a tunnel we were walking through. The focus for this post is the light at the end of the tunnel.

There are times when we feel boxed in, we are suffering from tunnel vision. The sad part is many people feel that is the natural or the norm and think that there is no way out or nothing different.

To get into that light, it is a walk in the park, but not necessarily the way you may think, matter of fact traditional and critical thinking has to go out the window and lateral thinking becomes more of a daily exercise.

There is a light at the end of the tunnel today, even though it is possible to be enclosed in a dark tunnel, in the worst situation as long as you can see that light and keep moving towards it, everything will be OK.

The light is your comfort in your darkest hour.

The prerequisite, is to know that light is in you, not someone else. Another person’s light will not give you the brightness you require to maneuver all the dark tunnels and rocky roads that you will have to walk through or over, to reach the full beauty of the park.

That is an expansion on the natural, which is the tunnel and the supernatural which is the fullness of the light without the confines of a dark tunnel. It is not necessary to wait until a person dies to see the light.

A team is more than one person, for the purpose of this post lets look at the family, a business and a sports club. The common denominator of all three is to be successful and be winners.

The light within one person connecting with the light within another person seems to be a stretch, in that there are so many differences in our world.

Actually, taking in the population of the world, seven and one half billion people, we are ninety-nine point nine per cent the same.

That gives us one tenth of one per cent opportunity to establish ourselves as unique as our DNA. It may be necessary to go to the supernatural to establish our own individuality.

To effectively function in a team, it is necessary to know ourselves.

The Sports Team is a group of players who no doubt have a purpose of winning a championship. Each player plays a position or have a responsibility and how each person performs in that position will affect all the other players. When each player know themselves, their contribution will be positive, even when a player is in a funk.

More than we realize, we depend on others to tell us what to do, or on the other end of the pendulum we don’t want to listen to anyone. In both cases we end up being the losers, we have to depend on ourselves. If we depend on someone other than ourselves we lose, if we fight against someone we lose.

Depending on someone or something outside ourselves is considered positive, being against is negative. The key word here is not the negative or positive, its control. One controls positively the other negatively.

To truly know ourselves is to be neither for or against anyone.

There are five essential characteristics to having a successful, winning team. There are other things as well but this essential. They are value, belief, independent thinking, teamwork and care for others.

Value and belief is in yourself and allows you to be an independent thinker making you a valuable member of a team because you care for others.

It all centers on knowing yourself.

In my next series of posts, each of those five characteristics will be expanded on.

It is all about walking into the light, not later but now.

Any questions or comments are appreciated.

This blog is journalistic in nature, it is a picture of the experiences that have shaped me over the course of my lifetime. It is a transparent look at myself and how it has been dealt with and what the outcome has been. My hope is that it may help you, because in the end it is strictly about YOU. View all posts by eileenruss

This site uses Akismet to reduce spam. Learn how your comment data is processed.